One month on, we are taking a look back at the SolarPower Summit – our first in-person summit in 2 years gathering key solar stakeholders to confer on how to take solar to the next level in Europe. This year’s conference came at a crucial time as solar is placed in the limelight as a significant actor in achieving greater energy independence in Europe in the wake of the Russian invasion of Ukraine.

Over 300 delegates from across the solar value chain joined us in Brussels at the Radisson Hotel on 31st March to discuss all the hot topics for solar. Covering all things from energy independence, permitting, manufacturing and solar jobs, to renewable hydrogen and emerging solar markets. The day was full of energy and optimism; solar offers a bright future, we must go faster to accelerate our clean energy technology.

Energy Commissioner Kadri Simson arrived at the summit on Thursday morning in a solar-powered Tesla thanks to LightYear Cars. She kicked things off with her keynote speech during which she noted the Commission is willing to do whatever it takes to bring solar manufacturing back to Europe, as well as expressing the need to simplify and speed up permitting processes. 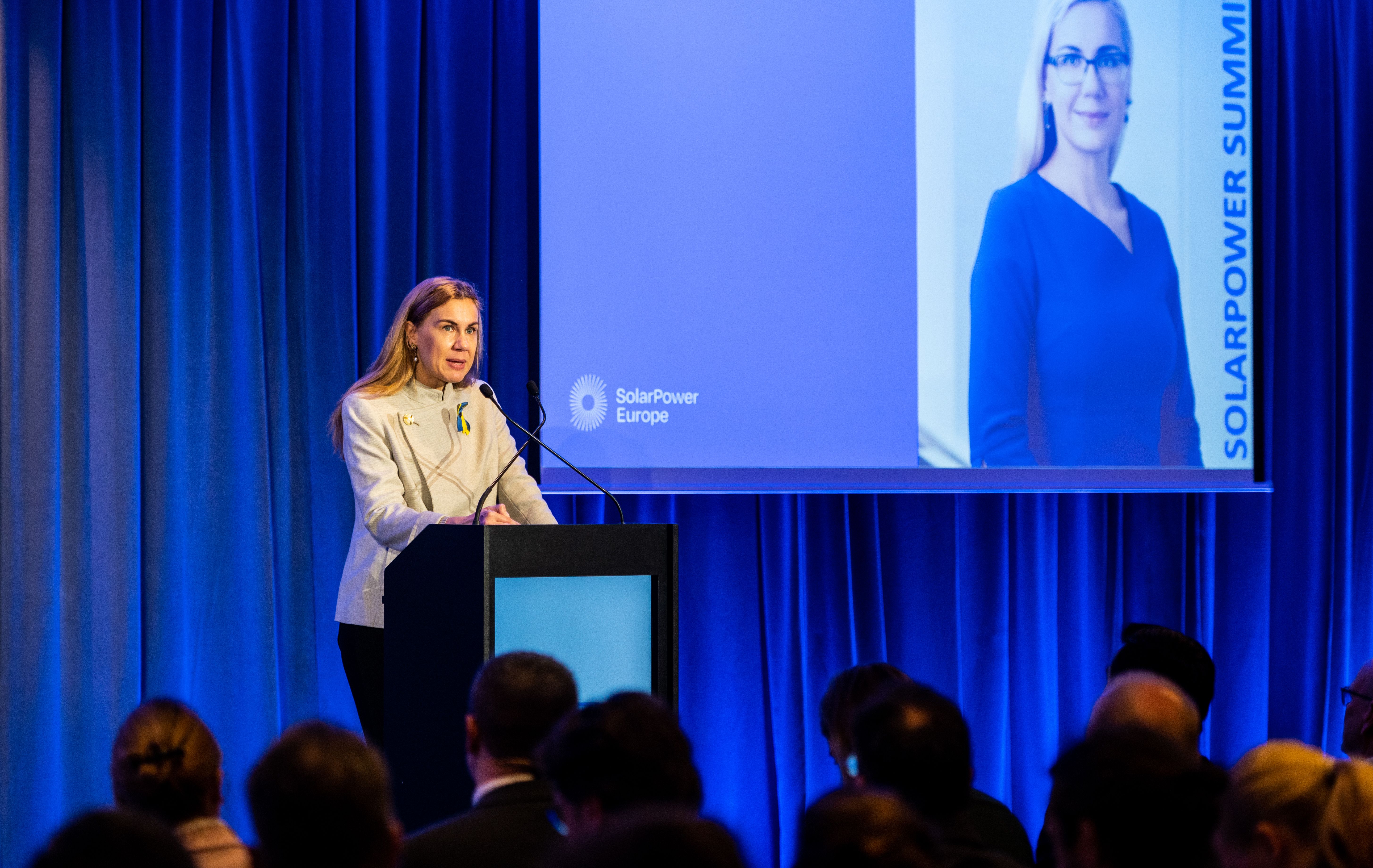 The opening session included speeches from SolarPower Europe President Aristotelis Chantavas and CEO Walburga Hemetsberger. Vice President Thomas Ostros (EIB) spoke on the willingness of the European Investment Bank to support the further growth of solar. This was followed by MEP Emma Wiesner and Energy Minister Nikolov engaging in a debate around how much we can rely on renewables to become independent from Russian gas or whether fossils still have to play a role – they both had quite different views! 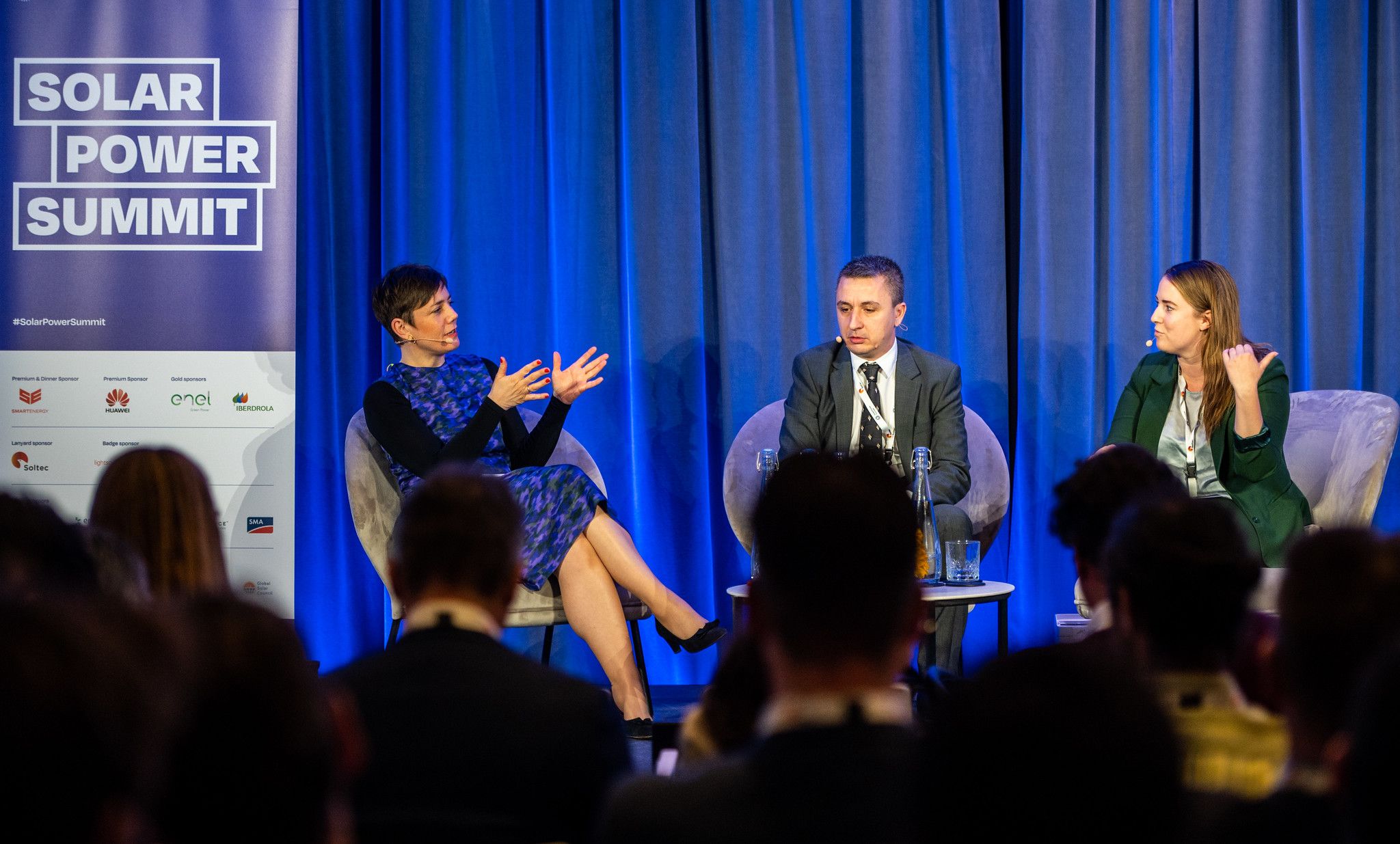 The topic of the moment came next: the imminent EU Solar Strategy. All panellists agreed that solar is key to meet our renewables targets; the European Commission’s upcoming Solar Strategy underlines solar’s importance for meeting 55% reduction of greenhouse gas emissions by 2030. The Commission has also asked for high solar growth in 2022 as part of its RePowerEU strategy, but the solar industry considers this short term year-on-year doubling of installations not possible due to supply issues and policy framework limitations.

This discussion was again very timely, as the previous day SolarPower Europe submitted an input paper for the EU Solar Strategy to Energy Commissioner Kadri Simson. The paper outlines 8 key actions that are needed to help us reach 1TW of installed solar capacity in Europe by 2030 to ensure energy security for European citizens and tackle climate change. All panelists agreed there is huge potential for solar on all fronts – from prosumers, to space-efficient solar, like agri-PV, floating solar, and others - simply because the versatility of solar is unmatched.

When asked if the European Union will be capable to increase the capacity of its solar power generation fleet to the TW-level by 2030 – what SolarPower Europe is asking for, up from around 165 GW end of 2021 - the majority of the panels said yes, including EIB’s Head of Renewables Alessandro Boschi and the DG Energy’s Deputy GD Mechthild Woersdoerfer.

Later in the day, the focus turned to permitting where the panel considered the current challenges to permitting processes, and highlighted the issues related to the lack of staff and the lack of training for authorities. Discussions also covered the challenges of environmental permits, the lack of guidance for authorities on how to realise those, and highlighted the benefits and shortcomings of qualifying projects as overriding the public interest. 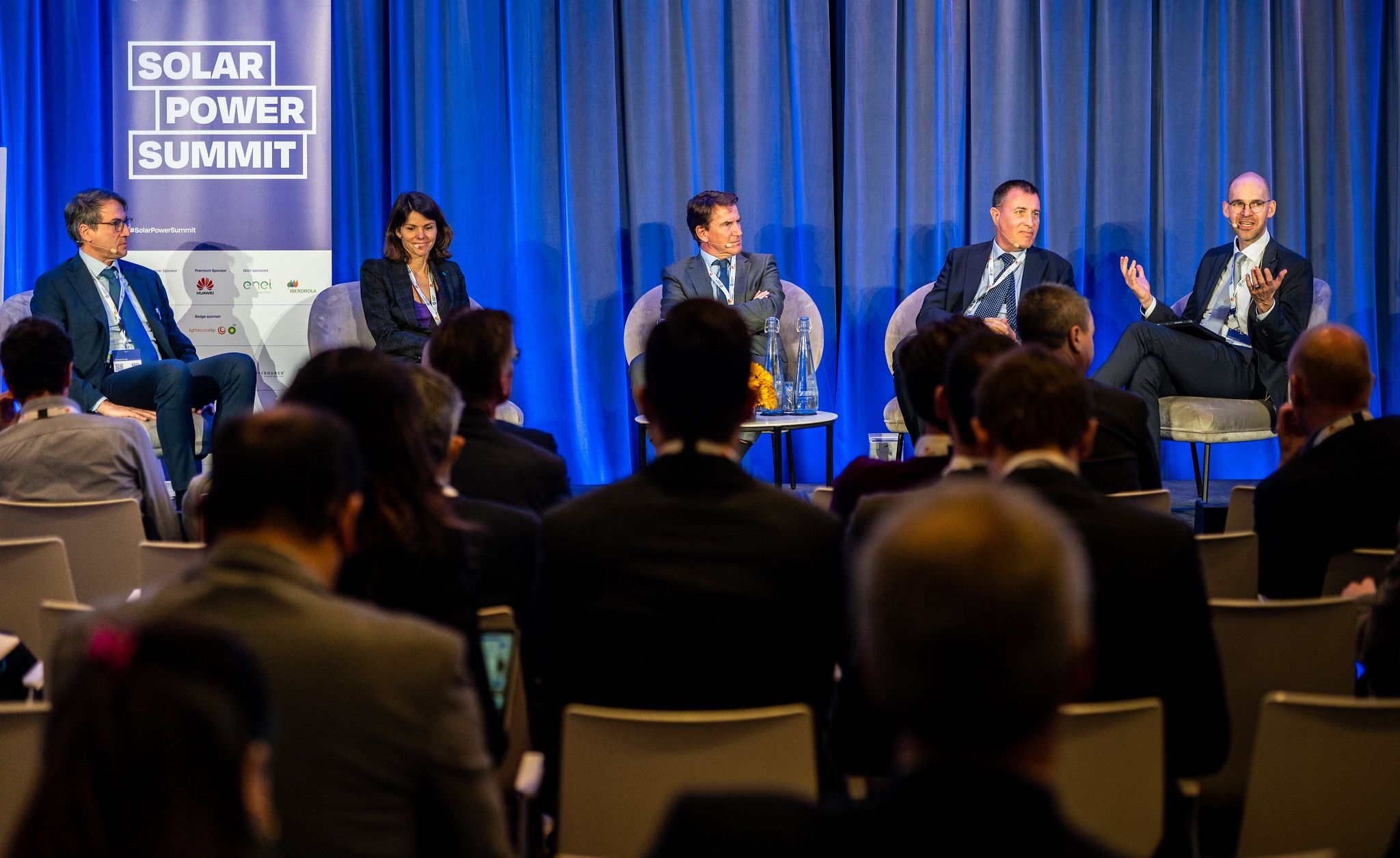 In parallel to the main sessions, there was a side event organised in collaboration with GET.invest covering all things emerging markets-related. The side sessions focused on enabling solar investments in emerging markets by addressing the various regulatory, financial and technical challenges faced by developers and investors; the various ways in which solar and renewable energy can support transformative change by ensuring a positive impact on the environment and supporting communities. The Quality Assurance for Solar Power Plants in sub-Saharan Africa session saw the launch of the new sub-Saharan African edition of the EPC Best Practice Guidelines.

The summit also hosted a side session in collaboration with the Renewable Hydrogen Coalition. This session covered the higher ambitions for renewable hydrogen in Europe set out by the RePowerEU communication in an attempt to reduce European dependence on fossil fuel imports. Although the use of hydrogen will likely vary in different regions of Europe, panelists agreed that, in this early phase, prioritising the use of renewable hydrogen in those sectors that have no decarbonisation alternative, such as hard-to-electrify sectors including heavy industry, aviation, shipping, is crucial for reaching climate neutrality goals and maximise energy system efficiency. 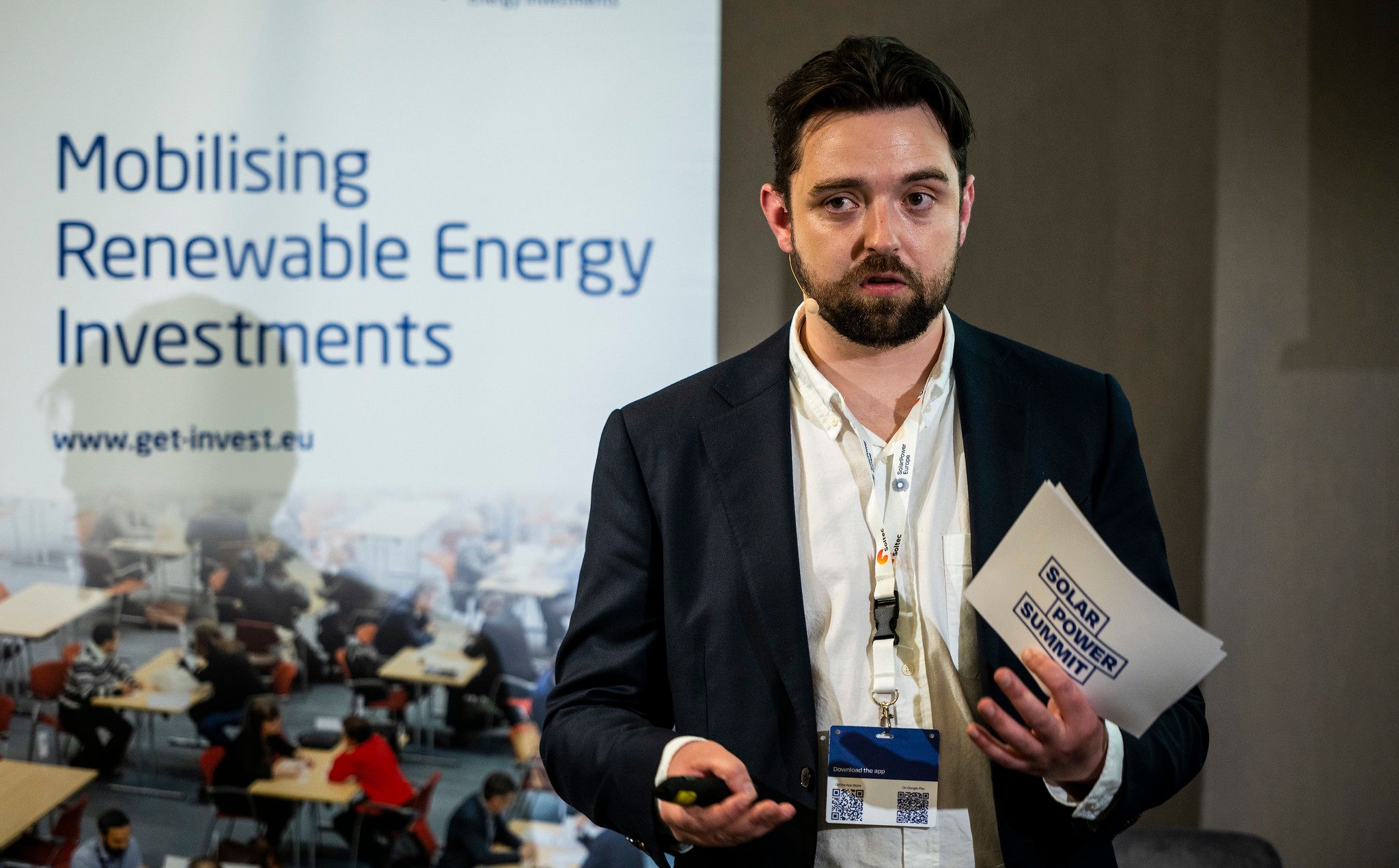 A successful, engaging and informative day was summed up in the closing session with Secretary General of EuropeOn Julie Beaufils and Climate Activist Adélaïde Charlier who said “the latest IPCC report sets out 2.4°C warming. You promised young people 1.5°C – we must go faster. Good to hear that solar companies are pushing for more ambition, Fit for 55 targets don’t keep 1.5°C alive.”

The vision is clear: we can solar-power our way to a climate neutral, energy independent Europe. We must act now, increase ambition and take solar to the next level.

If you would like to hear more about our pathway to 1TW of solar in Europe and key take aways from those who attended the summit, check out our special edition of the Shine On Podcast with host Anna Gumbau interviewing our Head of Regulatory Affairs Naomi Chevillard and Head of Market Intelligence Raffaele Rossi. 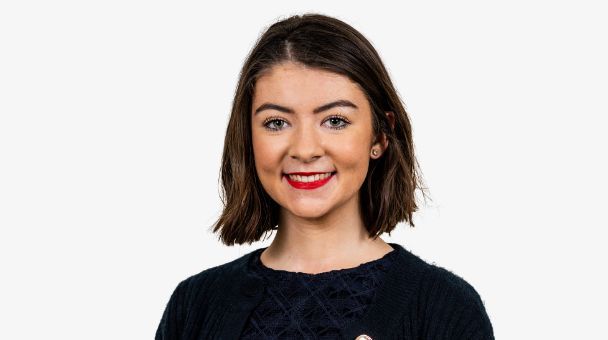